Smart home devices are becoming increasingly popular and are expected to become the trend of the future. So are smart home devices and are they actually beneficial? For those who don't know what System Home is, we have analysed this solution using the Aqara system as an example. What is a Smart Home?

In a word of introduction - smart home system (Smart Home) is a collection of electronic equipment installed and used at home. Such devices can connect and transfer information between each other through a central processing device (Hub gateway). Connection between electronic devices in the Smart Home ecosystem is done through wired (Ethernet) and wireless (WI-FI, Zigbee) communication. In this way, the user of such a system can remotely control devices connected to the family's smart home ecosystem. Regardless of whether he is at home or out of it. Using a Smart Home system allows for more efficient management of equipment in our home. In addition, automation of multiple devices in one system significantly reduces energy costs.

Taking a closer look at Aqara's products, we may be surprised by the fact that the offered solution is confusingly similar to the system offered by Xiaomi. This similarity results from the fact that Aqara and Xiaomi have a common parent company. For the production of devices for both companies is responsible Lumi United Technology factory based in the city of Shenzhen in China. If we compare these two systems, we can see that products from Aqara are slightly more expensive than Xiaomi. This difference is due to the investment in the information security system by Aqare, as well as the technology used. Thanks to such investment, most of Aqara's devices are compatible with Apple's HomeKit ecosystem, while home equipment from Smart Xiaomi does not have such compatibility (Xiaomi Hub is an exception). This can be considered the most distinctive difference when comparing these two Smart Home systems. For a Smart Home solution, the most important and required device is the Central Processing Unit (also known as a gateway or hub). The device that performs this role in the Aqara Smart Home system is the Aqara Hub accessory. This equipment plays the role of connection and transfer of information between slaves and enables remote control of the units via WI-FI.

A huge advantage and key difference compared to Xiaomi devices is Aqara's compatibility with Apple HomeKit. This means that both the Aqara Hub and any devices you connect to the Hub port can be directly managed from the Home app on your Apple device.

In addition to acting as a central information transmission station, the Aqara Hub has a built-in speaker that is used as a smart doorbell, alarm clock, or security alarm.

The Aqara Motion Sensor accessory stands out from other sensors available on the European market due to its compact size. Because of that, the device can be installed almost anywhere; in the hallway, stairs, bathroom or bedroom. The sensor can be installed in two ways. Using the included stand or without it. The included base allows you to control the position and operating space of the sensor. The use of the base is more convenient in everyday use.

Aqara Window & Door Sensor - This is a smart device widely used in homes as part of the security system. The sensor detects the change in the status of windows and doors from closed to open and vice versa. When the change is detected, the device immediately sends a notification straight to our mobile device. 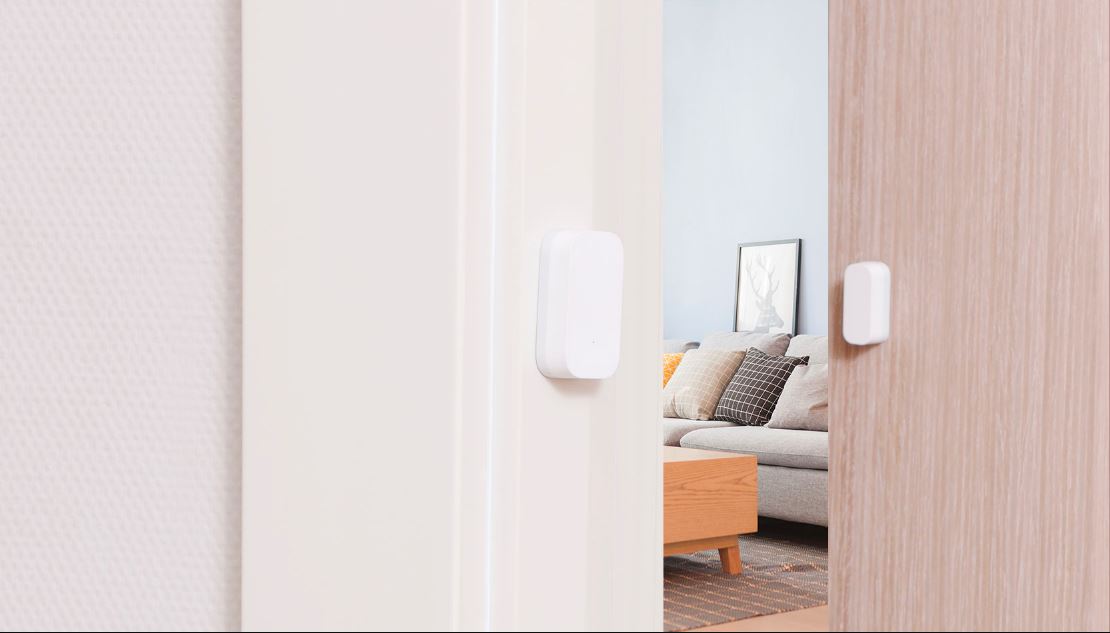 The Aqara Water Leak Sensor is responsible for detecting water leaks from household appliances such as washing machines, sinks, tanks, and water pump systems. As soon as the sensor detects a water leak, it sends a notification to the Aqara Hub, which then sends a notification to your mobile device. With this sensor, you can detect and repair the problem in a timely manner, avoiding damage to furnishings or other systems in your home.

While the sensor itself only provides us with basic information about temperature and humidity. Its ability to be used in home automation is much more extensive and flexible when combined with smart devices, for example: The Aqara G2H camera is one of the most anticipated security products this year, all because of its Apple HomeKit compatibility. This is the first surveillance camera from Xiaomi's lineup that can be supported by Apple HomeKit software. This new product has many more advanced features than its predecessor Aqara G2. The G2H camera has received the rigorous Apple HomeKit security certification and uses comprehensive encryption technology. All recorded videos are encrypted and secured before being uploaded to the cloud. Interestingly, the camera can also serve us as a replacement for the Aqara Hub M2 master gateway.

The camera has been equipped with video recording in 1080P resolution, which allows users to enlarge the image while maintaining clear focus. Additionally, the manufacturer has equipped the G2H camera with a 140° angle - this is a relatively wide recording angle compared to commercially available camera equipment. Such a wide angle significantly minimizes blind spots.

Aqara Cube is a smart wireless controller that provides a fun and easy way to control all of Aqara's smart home devices. The physical appearance can be described in two words: white and cube, this is the most accurate description of the Aqara Cube controller. Inside, a Zigbee-compatible interface and a six-axis motion sensor are installed, allowing us to control devices in the home with six simple gestures:

The aforementioned devices are just a few of the many convenient accessories in the smart home product system that Aqara offers its users. With extremely important benefits such as: